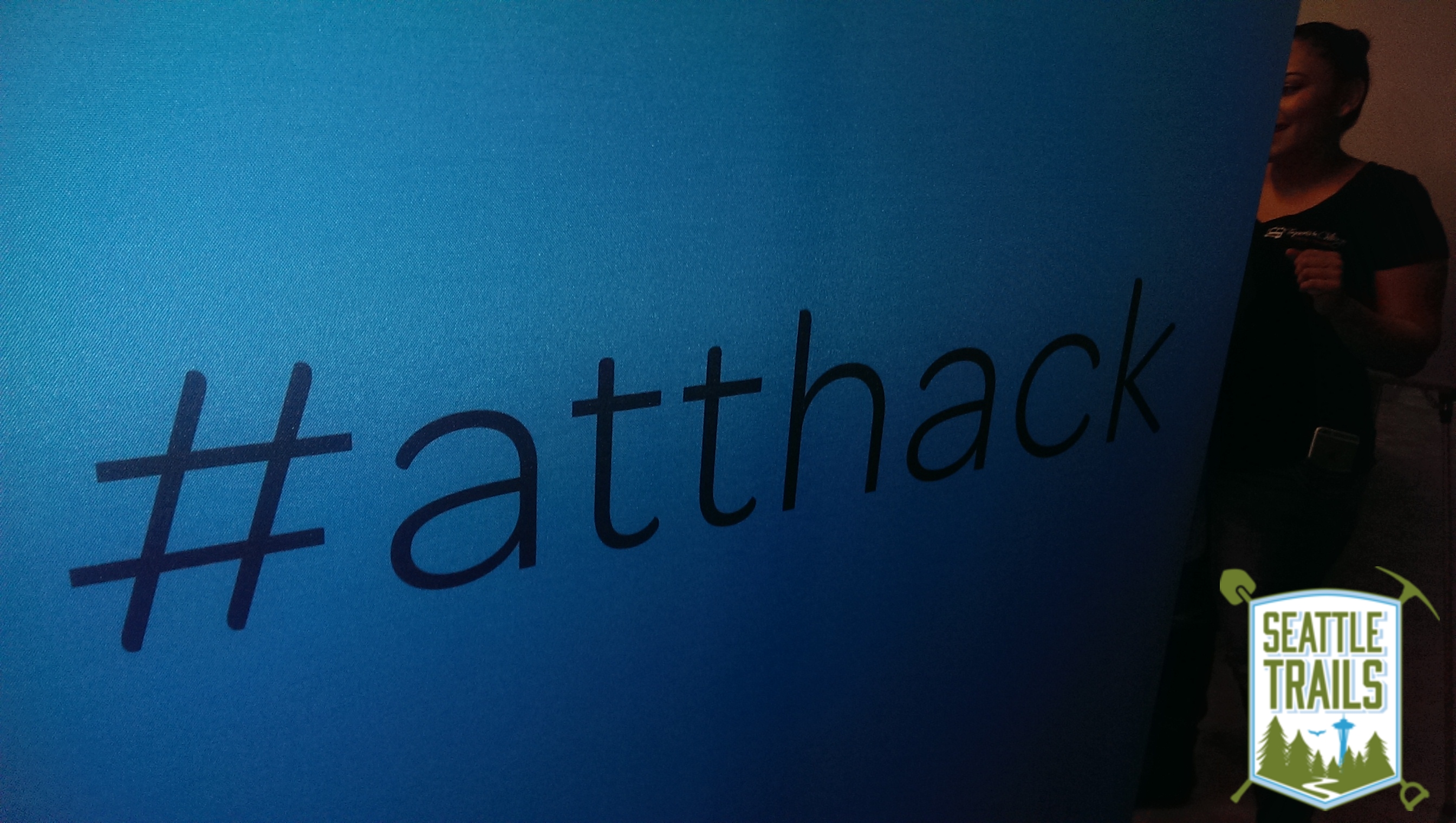 On Friday (3/18) and Saturday (3/19) the Seattle Trails Alliance and Seattle Parks Trails Program Staff attended the AT&T Hackathon at the Surf Incubator offices in downtown Seattle.  The Hackathon had a specific focus which was to encourage the mobile app development community to make use to the newly released and complied Seattle Parks and Recreation data that has been made available via the new portal: data.seattle.gov.  As part of Mayor Murray’s Open Data Executive Order that was signed on February 1st, 2016; all city departments will be shifting datasets and the accompany metadata to the platform that is built and maintained by 3rd Party Data manager Socrata.    Socrata’s cloud-based solution allows government organizations to put their data online and make data driven decisions.
The Hackathon was well attended with over 150 coders, developers, graphic designers, and data management professionals.  Since the Trails Shapefile and Inventory data is now online, it was in the best interest of our program to attend and encourage the development of apps that will utilize our data in a way that serves the public through innovation, but also serves the purposes of the maintenance staff.  We developed a punchiest of potential elements (below) that we would like to see in a trails app and distributed it to the attendees as they arrived .  This turned out to be a great idea as over half of the apps that were developed in the 24 hour event included some element that made use of the Trails Data.    The winning team created a app that was of kin to the Find-It Fix-It app where users could provide timely feedback to Seattle Parks and Recreation on conditions at a facility.
While none of the apps developed during this event are “shelf ready”, many had potential to be built upon.  The most important outcome of this event was that our SPR data was introduced to the Development Community here in Seattle and Beyond.   We will need to work actively to build upon the success of this event by continuing to network with the development and data community and to ENSURE that our data, including the TRAILS DATA, is always current, relevant, and ACCURATE.
To that end we will be actively seeking out Civic Engineers to assist in developing a Mobile App.   A potential APP that would benefit the recreational end-user as well as the SPR staff would include the following:
·         Real Time Positioning in Relation to the Parks Boundary and Trail.
·         Issue Reporting (Comment, Location via pin drop, Photo, Contact info for follow up, etc.)
·         Volunteer Sign Up
·         Route Tracking w/ Fitness Elements (Pedometer, Calories Burned, etc.) and ability to save.
·         Pin Drop and Social Sharing of Photos, Routes, Favorite Points of interest, Wildlife sightings, volunteering events w/ #SEATRAILS hashtag included in share.
·         Moderated Wiki-style links to historical/cultural points on map.
·         Links to neighborhood services, transportation options, Community Programs, local business in relation to position on the trail.
·         BONUS:  Check-in System that allows trail users to earn different badge levels as frequent users of the Park.